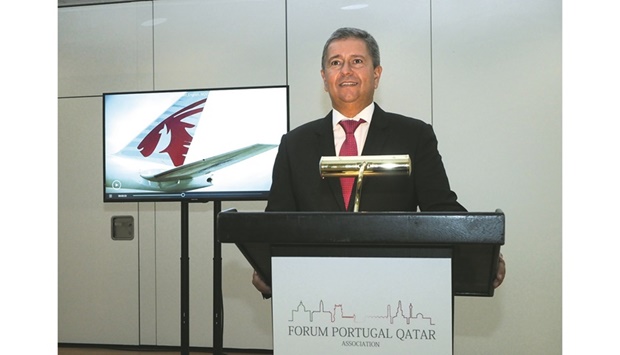 GULF TIMES, March 06 2022: Portugal can become a strategic gateway to strengthen Doha’s global liquefied natural gas (LNG) supply chain to Europe, through its deep water port, according to Lisbon-based Forum Portugal Qatar (FPQ), a non-profit organisation to promote trade between the two countries.
“Portugal deep water port (Sines), is ready and has the capacity to store LNG, and the pipeline to distribution directly to Central Europe,” said Nuno Anahory, founder and chairman of FPQ, which will organise Qatar-Portugal Trade and Investments summit in October this year.
Sines LNG terminal is a regasification terminal in Setúbal District, Portugal and accounts for more than 55% of gas entering Portugal. It lies about 150 km to the south of Lisbon.

The European Council is reviewing the energy strategy (especially on account of its dependence on Russia) and the permanent situation lies in the opportunity to rebuild the energy’s facilities inside Europe, according to him.
“Portugal for its natural geography, open to Atlantic sea will be a key point for gas supply, and distribution through Europe,” he said.
Recently, Reuters reported that Portugal’s Energy Secretary had said Europe must urgently diversify its natural gas supply sources to reduce its dependence on Russia, pointing to big producers such as the US and Qatar as potential alternatives.
Qatar had delivered its first cargo of LNG to Portugal in 2010.The cargo, sold on the spot market, was delivered to Galp Energia SGPS at the Sines LNG terminal.

“FPQ looks forward to collaborate with all entities to promote ties between two countries,” he said, highlighting that the leading Qatari investment in Portugal is the new W Hotel and Residences in Algarve.

FPQ offers dedicated assistance in providing contacts and support to trade missions, important business people and other, planning to visiting Qatar, and those all entities from Qatar planning to visiting to Portugal, in order to promote proactive joint economic relations.
The association extends its legacy to the Lusophony community of 280mn habitants, the Portuguese African speaking countries, where it has strategic partnership with business council with representation in each country, he said.

Qatar is an associate observer to the CPLP- Community of Portuguese-Speaking Countries, a global entity made up of nine countries Angola, Brazil, Portugal, East Timor, Cape Verde, Sao Tome and Principe, Equatorial Guinea, Guinea-Bissau and Mozambique.
“This reflects Qatar global development role and is within the framework of the multilateral international co-operation strategy pursued by the state to co-operate for development and to enhance cultural exchange with all countries and people,” Anahory said.
Portuguese imports from Qatar grew sharply in 2018, from 155mn euros in 2017 to 223mn euros in 2018, due to the growing commercial relationship between the two countries, which was accentuated by the imports of mineral fuels whose share of imports in 2018 was 199mn euros.
Portuguese exports to Qatar peaked in 2017, reaching 34mn euros and have been decreasing smoothly ever since throughout 2018 and 2019.
About the planned summit in November, he said FPQ is working to promote among Portugal’s leading companies to visit and exhibit in Qatar business events, and looking forward to support Qatari companies and businessmen to welcome in Portugal.
“In this time of uncertain times, and new geopolitics map, Portugal is a natural entry for strategic sea transport from Atlantic sea, not only as a direct connection to America, but mainly as a natural corridor to supply Europe by road and rail, ” he said.